Anxiety and depression are pathologies that affect human

beings in many aspects of life, including social life,

productivity and health. Cannabidiol (CBD) is a constituent

non-psychotomimetic of Cannabis sativa with great

psychiatric  potential, including uses as an antidepressant-

like and anxiolytic-like compound. The aim of this study is

to review studies of animal models using CBD as an

Studies involving animal models, performing a variety of experiments on the above-mentioned disorders, such as the forced swimming test (FST), elevated plus maze (EPM) and Vogel conflict test (VCT), suggest that CBD exhibited an anti-anxiety and antidepressant effects in animal models discussed. Experiments with CBD demonstrated non-activation of neuroreceptors CB1 and CB2. Most of the studies demonstrated a good interaction between CBD and the 5-HT1A neuro-receptor.

https://www.ncbi.nlm.nih.gov/pmc/articles/PMC3691841:  Several studies suggest that THC and CBD may exert opposite actions on brain function and psychopathology [188], possibly in relation to the action of CBD as a potent CB1 receptor antagonist/inverse agonist [21] (see above). Several lines of preclinical work have shown that CBD reduces the effects of THC on several behavioral functions [189-191]. In line with these data, CBD has been found to reduce the anxiety and improve the sensation of well being induced by an acute, high THC dose in healthy volunteers [192].

In contrast with these data, a number of studies have shown that CBD pretreatment potentiated the behavioral effects induced by THC [193-195]. These actions may signify the ability of CBD to inhibit cytochrome P450-mediated drug metabolism [196,197], which may increase THC blood and brain concentrations [193,195].

Notably, the behavioral outcomes of CBD do not appear to be only due to potential pharmacodynamic/pharmacokynetic competition with THC; indeed, recent studies have shown that CBD exerts inherent anxiolytic effects, both in rodent models [157,198-201] and, more recently, in patients affected by social phobia [202,203]. The anxiolytic action of CBD may be linked to 5-HT1A receptor, but not through benzodiazepine receptors [204]. Of note, the anxiolytic action of CBD also appears to be bidirectional, as only low to moderate doses, but not high doses, have been associated with exert anxiolytic effects [200,205].

The anxiolytic action of CBD do not appear to be mediated by benzodiazepine receptors [204], but rather by 5-HT1A serotonin receptors in the bed nucleus of the stria terminalis [206], a critical component of the amygdaloid complex involved in the regulation of stress response.  Accordingly, CBD has been shown to reduce amygdalar responses to fearful stimuli [207]; this mechanism may be essential for the anxiolytic effects of this compound in social phobia [203]. Furthermore, CBD has been shown to elicit antipanic effects through the activation of 5-HT1A receptors in the dorsal periaqueductal gray, a critical area for the modulation of emotional reactivity to stress [208,209].

​https://www.ncbi.nlm.nih.gov/pubmed/16389547:  Alzheimer's disease (AD) is the most common age-related neurodegenerative disorder. A massive accumulation of beta-amyloid (Abeta) peptide aggregates has been proposed as pivotal event in AD. Abeta-induced toxicity is accompanied by a variegated combination of events including oxidative stress. The Wnt pathway has multiple actions in the cascade of events triggered by Abeta, and drugs that rescue Wnt activity may be considered as novel therapeutics for AD treatment. Cannabidiol, a non-psychoactive marijuana component, has been recently proposed as an antioxidant neuroprotective agent in neurodegenerative diseases. Moreover, it has been shown to rescue PC12 cells from toxicity induced by Abeta peptide. However, the molecular mechanism of cannabidiol-induced neuroprotective effect is still unknown. Here, we report that cannabidiol inhibits hyperphosphorylation of tau protein in Abeta-stimulated PC12 neuronal cells, which is one of the most representative hallmarks in AD. The effect of cannabidiol is mediated through the Wnt/beta-catenin pathway rescue in Abeta-stimulated PC12 cells. These results provide new molecular insight regarding the neuroprotective effect of cannabidiol and suggest its possible role in the pharmacological management of AD, especially in view of its low toxicity in humans. 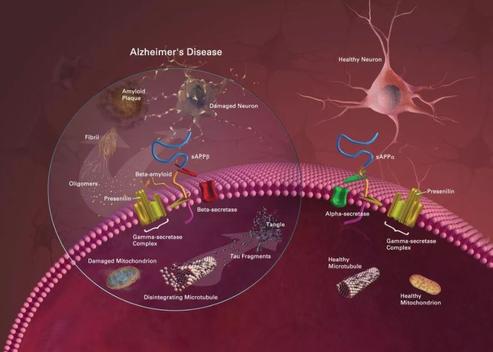