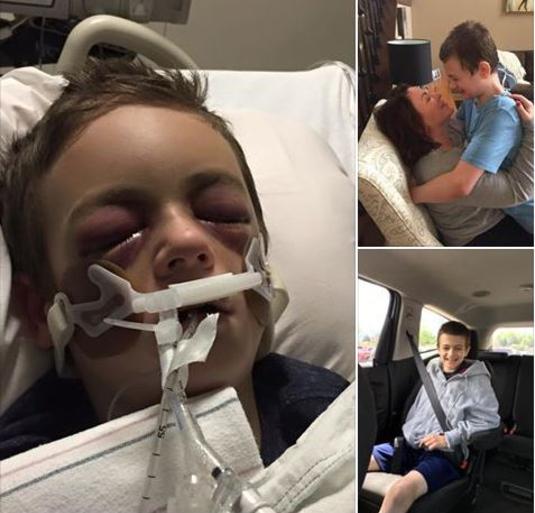 Julian had always been a kind and affectionate boy in his younger years. When Julian turned 13, the onset of puberty brought new challenges. In February of 2016 Julian became extremely violent toward both family and school staff. He began raging daily and would physically attack us.

It  got to the point where we, as his family, needed to wear protective clothing to avoid being bitten,

having our hair pulled, and being kicked and punched. His younger sister could not be in the same room and she had to spend all of her time at home locked in her room for her own protection.

In August 2016, Julian began to turn the violence on to himself. He began punching himself in the head full force thousands of times per day. He would use his knee to injure his teeth. He would bang his head into walls. We were powerless to stop him. We were trying to protect him using helmets, arm immobilizers and at times we had to physically restrain him for hours at a time to keep him from harming himself. We believed our son was in terrible pain and was suffering from debilitating headaches. We saw this once vibrant boy lose his will to live. He seemed determined to end his life and came close several times. Between October 2016 and January 2017, Julian was hospitalized 3 times. He suffered self-inflicted skull fractures and massive tissue damage. He had black eyes and giant hematomas on his skull regularly. The hospital staff offered psychiatric medications as well as Gabapentin but nothing could stop the daily rages that lasted every moment that he was awake. I felt certain that if we could not get Julian cannabis that he would find a way to end his life.

Julian qualified for cannabis through the state program because of his seizure disorder. After being sent home from Children's Hospital in Minneapolis after another life threatening episode of self-injury with no plan in place to heal our son we felt cannabis was our only hope. The excruciating pain our son was in was getting worse and we knew no pharmaceutical medication could help him. We had tried everything the doctors offered and had absolutely no success. We enrolled him in the Minnesota Cannabis program in January 2017. Within a week of beginning cannabis therapy Julian was able to go about an hour without harming himself.

As the weeks went on and we reached a therapeutic dose Julian's behaviors began to slowly melt away. By early March he was smiling again. Within 6 weeks of beginning cannabis Julian was no longer injuring himself or others. He began to take an interest in his life again. He returned to school full time. We were able to remove his helmets and protective gear. By mid-March we were getting smiles and hugs. Julian began to go outdoors again by mid-April. By May Julian began to show interest in using augmentative communication for the first time in his life.
It is now late June. We have not seen 1 episode of self-injury since early March. Julian has not struck me since February. Julian is enrolled in a day camp for children with special needs where he spends 8 hours a day. He is exploring outside and making friends. He is happy and smiling. Julian and his sister have a relationship once again. Julian spends hours in our back yard enjoying bouncing on his trampoline, moving his body and taking in fresh air. He lives safely and happily in our home. He is free from pain. His seizures and motor tics are well managed to the point they are not interfering in his daily life.

Cannabis gave us our beautiful son back. Julian is alive and well today because of this miracle medication.
These photos are of my son before cannabis therapy and after.

Here is my testimony for the law makers in Minnesota regarding medical cannabis as a qualifying condition for treatment of people with Autism: My name is Victoria. I'm the mother of a 14 year old boy named Julian. Julian has severe Autism and a seizure disorder. Julian began having seizures in June of 2011. We have tried many medications over the last 6 years, however seizures and motor tics continued to be an issue.